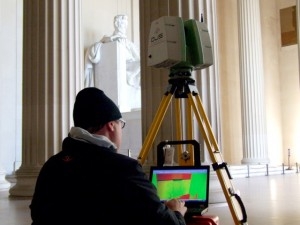 In December 2013, DJS Associates, Inc., a firm specializing in 3D scanning technologies,undertook a project of enormous magnitude on behalf of the National Park Service (NPS) and CyArk, a nonprofit organization dedicated to digitally preserving cultural heritage sites around the world. The goal: digitally scan the Lincoln Memorial for historical preservation. As with most scanning projects, planning and preparation were the keys to success. The Lincoln Memorial, with its size, location, and government regulations, presented unique obstacles.

When it comes to 3D scanning projects, one of the most important considerations is the purpose for the scanning as it relates to the intended deliverables. Here, we knew the data would be utilized for a myriad of scenarios, including applications in site maintenance, virtual tourism, and educational content. The intended deliverable was a robust “point cloud”: a collection of measurement data points, each having an exact position in a three-dimensional coordinate system. In addition to scan data, high-resolution photographs would be taken from a multitude of positions throughout the site.

Having defined the project scope, a site visit helped to characterize specifics for data collection.Public areas appeared to be fairly straightforward. However, being onsite gave us an appreciation for the large number of tourists who visit the memorial. Common areas such as the steps and main chamber would need to be scanned early in the day.

The most surprising portion of the site visit came when we ventured into the massive basement portion of the memorial. Just off the exhibit area, a doorway leads into a mezzanine walkway that traverses the perimeter of the building, with open views of a lower-level basement area with a dirt floor from which hundreds of concrete columns rise up to support the weight of the marble and limestone above. A series of metal steps leads down to the lower level, where the floor-to-ceiling height is a tremendous 40 feet. Continuing through the maze of columns, we found ourselves directly beneath the steps that millions of visitors climb to reach the chamber level of the memorial. Here, floor-to-ceiling height quickly reduces, until it is little more than 10 feet at its furthest extent, near the Reflecting Pool. This portion of the memorial would require special planning.

For the project, our choice for 3D laser scanning technology was terrestrial lidar. The major advantage of lidar is the number of data points that can be collected in a short period of time. In seconds, terrestrial lidar equipment can record as many as 1 million data points, accurate within millimeters!

While this is a terrific benefit, there are also limitations that come with this technology. One is that it is a line-of-sight instrument. In order to record data points on an object, it has to be “viewable” by the laser. Another important consideration is that while some laser scanners have long ranges, data points collected at the extents of the range often have larger spacing between them. When all of the individual scans are ultimately combined, it is important to have a consistent overall point-to-point density. Each of these limitations is easily addressed by thoughtful planning of scan locations.

When 3D scanning is utilized in heritage documentation efforts, another consideration is the use of color data. Color information, when collected in tandem with 3D laser scanning, can be utilized as a display option when viewing data points. While many laser scanners come equipped with on-board cameras, these often use low-quality optics and produce low-resolution images. Additionally, no adjustment is typically made to compensate for scenes that include very bright and very dark areas. For this project, we utilized a Digital Single-Lens Reflex (DSLR) camera at each scan position, generating high resolution, High-Dynamic-Range (HDR) panoramic images.

In the main chamber, which houses the iconic Lincoln statue looking eastward toward the Washington Monument, an aerial work platform provided vantage points for collecting data on Lincoln’s head and the upper surfaces of his arms. (Our initial idea to physically climb onto Mr. Lincoln’s lap to utilize hand-held scanners was prohibited by the NPS).

In the attic area directly above the main chamber, specially trained personnel used harness equipment to comply with safety regulations. The FARO scanner worked perfectly due to its fast data acquisition and small form factor. There are stone panels just above the main chamber designed to allow light to pass through, illuminating the area beneath. In many areas, these two-inch-thick panels were the only things separating technicians on the roof from the chamber below.

In all, there were more than 600 scanning positions throughout the site, and 5000 photographs were taken. This produced a tremendous amount of data, roughly 4 billion data points.

Detailed planning, execution, and onsite documentation left us in excellent position for data registration. Data registration is the process by which individual scans are aligned to each other, precisely translated, and rotated until an optimal alignment is achieved.

Once all of the scans were registered together, we moved on to data cleaning. In this process,sections of the whole registered “point cloud” were examined, identifying and removing objects in the scans not germane to the site. These included people, vehicles, animals, and even falling raindrops and snowflakes.

The final step was to stitch together the HDR panoramic images and map them to the scan data. At each scan position, multiple exposures were captured at specific rotational increments,resulting in 20-30 photographs per setup. These photos were aligned and stitched together, generating a spherical panoramic image to be mapped to scan data and providing an excellent display option for the “point cloud.”

Having processed all of the 3D scans and photographs, the digital data was organized, backed up, and encrypted before being stored on a high-capacity portable hard drive, which we provided to CyArk.

In addition to archiving this data, CyArk and the NPS will have the ability to explore the Lincoln Memorial remotely, from nearly any vantage point, similar to a virtual tour. It will now be possible to view the site from any angle, whether directly in front of the Lincoln statue or high above the site.

In the coming months, CyArk and the National Park Service will work together to generate educational content and maintenance baselines for future renovations and upkeep.
Jon W. Adams, Director of Architectural and Heritage Services can be reached at 215-659-2010 or via email at experts@forensicDJS.com.

Connect With Us on LinkedIn